Did you know that Sheridan had an Ice Cream Factory?
An ice cream factory, which began as the Vickery Ice Cream Plant in 1915, was located north of the Monon Railroad tracks on Park Avenue between the grain elevator at 802 Park Avenue and Vickery's Coal Yard at 800 Park Avenue. These were three of the businesses located in a neighborhood called "Little Italy" on the southeast side of Sheridan. The ice cream factory became the Pulliam and Sons Ice Cream and Ice Factory in 1919, and it was still operating as of 1935. 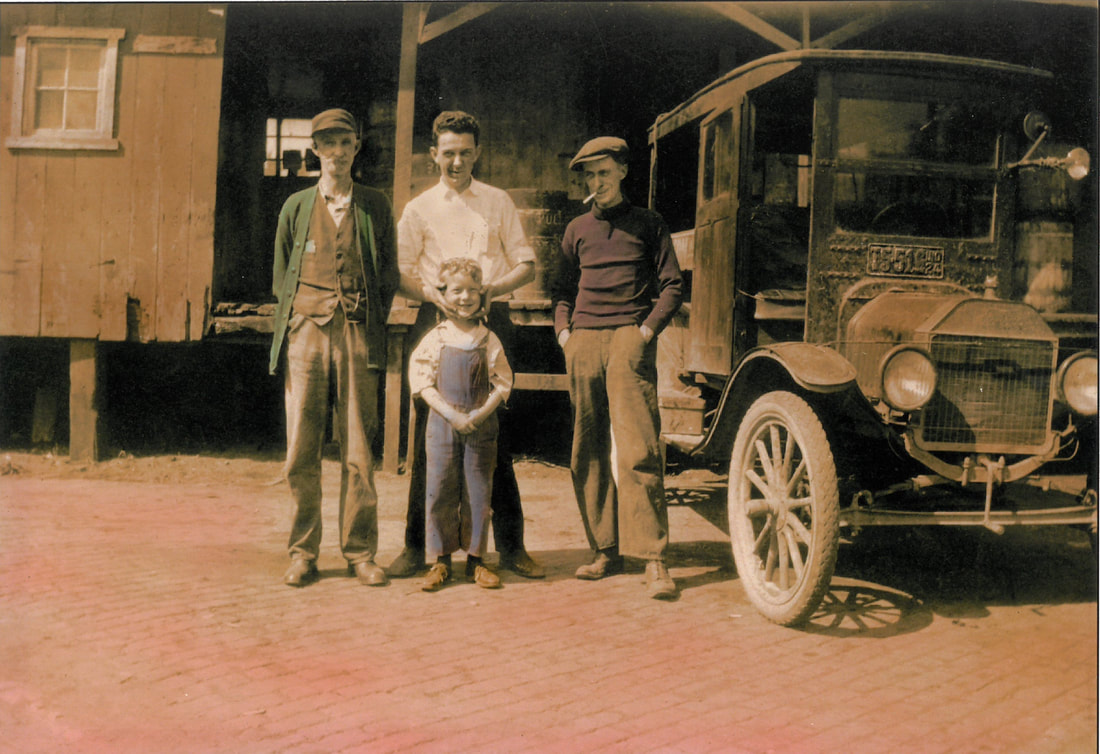 One of the fascinations of my childhood, in the early 1920's, was the Ice Cream Factory located in Sheridan, Indiana. My dad, Earl Pulliam, and my grandfather, John Pulliam, bought it from a Mr. Vickery. They named it Pulliam & Son Ice Cream. My two brothers, Eugene and Meredith, worked there with Ben Miller, Morris Pettijohn, George Ogle, Charles Couch, Noel Davis, Myron Hinshaw, and Byron Stout. I'm not sure if there were others or not.

The factory was located on Park Avenue alongside the railroad tracks. The Wallace Grain Elevator was across the tracks from it. Across Park Avenue from the elevator was Indiana Wilson Milk Company, sometimes called Indiana Condensed Milk Company, or the "creamery." Later it was bought by Kraft Foods.

Next to the factory was Pickett's Coal Company. I've been told it was owned by Hod Pickett. Across from there was the Corner Grocery Store. It was a small grocery with a lunch counter in the back. At one time, Maurice Johnson managed it. Jesse Griffith and my brother, Meredith, clerked there at times. This area was called "Little Italy." I was told it extended from the grocery to 10th St. That would include the ice cream factory, grain elevator, and the creamery. It know there are many with fond memories of "Little Italy."

​The ice cream factory was built up off the ground. I guess the porch was called a dock. It was higher than the back of the delivery truck, so much lifting had to be done when a delivery was received at the factory. Meredith had to lift the 300 pound cakes of ice that were brought in from the Power & Light Company on Ohio Street. He only weighed 129 pounds, so he had to learn how to do it. He told me "The lifting was largely a matter of maneuvering the blocks, but I did, on occasion, clear lift the 300 pound blocks. Several of the milk truck drivers were pretty muscular and couldn't do it, much to their embarrassment, but then they could swing a full can of milk from the ground into their trucks, and I couldn't. I just didn't point this out to them. Tricks to all trades." Meredith was in his late teens at the time.

The porch was wooden, and I still remember the hollow sound when I bounded across it. I also remember how they moved the ice cream tubs across it. They were tipped up and rolled, one hand over the other.

In those days, cars and trucks were started much differently than they are today. A hand crank was inserted into the engine at the front of the vehicle, and then the engine was turned by hand until it started. They had a Model T Ford. Meredith said, "There is no way to explain a Model T Ford. They had a mind of their own and were a lot like an old mule, as they did as they pleased." Another time he said "The Model T kicked like a mule." In the winter, the water in the radiator had to be drained every night or it might freeze and crack the engine.

In order to keep ice cream frozen while being delivered to the stores, they packed the cans in wooden, or later, canvas packers. Crushed ice and salt was packed around the cans. The rock salt was brought in box cars on the train tracks. It was shoveled from there by hand to the storage room. Then it had to be shoveled on back to make room for more. That must have been a lot of work.

Sunday morning was a delight for me. I'd go to Sunday School, and then stop off at the factory on my way home. I'd dip up a pint of ice cream and sit and eat it while reading the funnies. Of course, I didn't do that every week. There were many flavors to choose from: vanilla, chocolate, strawberry, orange pineapple, peppermint, walnut, maple, tuttie, fruitti, and pumpkin. There was also an orange ice (my favorite), as well as orange or lemon sherbet. They tried every flavor they could think of.

Inside the first door was a waist high Fridgedaire freezer that held twelve five-gallon cans of the top quality ice cream. We've had many people tell us they remember it, and that it was the best they ever ate. Dad used only top quality ingredients. I had in my mind they used 40% butterfat, but I'm told that was too high. I do remember the peppermint extract-it was really potent! Dad made some peppermint candy at home one time and used too much. We just about had to move out.

The second room of the factory had a pot-bellied stove for heating. I remember my brother, Eugene, sitting by it with his feet propped up on it, studying. (He got his equivalent of a college degree this way.) My sister, Mildred, told me in this room they washed the cans and then sterilized them with hot jet streams of water. Also, there was a vat in this room which was used to pasteurize the milk.

In the next room there was a gas burner that held a large copper tub for roasting peanuts or making taffy or peanut brittle. The taffy was cooked to just the right temperature, then cooled. When the taffy was cool enough to be handled, it was attached to a large metal hook fastened to the wall and pulled until it reached the right consistency. Only then was it cut into pieces.

In my mind's eye, I can still see one of my brothers stirring the taffy or the peanuts with a long wooden spoon. It seems to be a fact that someone could stick a finger in a hot liquid and then quickly pull it out without being burned. Of course the trick was to then stick it in very cold water. Meredith couldn't remember why they did that, but it was done. (In fact, I watched the host of a TV cooking show do that very thing. It was his way of tasting the food.)

The middle room was large. It not only held the copper tub, there was an ice cream mixer and a large table in it where "Eskimo Pies" were made. The ice cream mixer was a large, doubled walled, metal cylinder into which all the ingredients were put. The mixture was in the inner cavity, where paddles did the mixing and kept the mix from freezing to the wall. The outer wall contained a circulating brine that caused the freezing. The ice cream came out of this freezer in a form much like the soft serve you can buy in some stores now, only it was much richer.

On the other side of this big room was a long table that was used when making "Eskimo Pies." "Eskimo Pies" was a trademark that Dad had to pay to use. I think someone still makes them. Meredith explained how they made them. There were special pans with holes in the bottom which they covered with waxed paper, and then filled with ice cream. These were then frozen, and then warmed a bit on the bottom so when someone blew on the bottom, the ice cream came out in a solid block. This was sliced into bars, a wire hook was pushed into it, then the whole thing was dipped into pure milk chocolate that was heated to just the right temperature. Each one was then hung on an overhead line to drip and dry. I suspect timing was very important. Once in a while I would sneaked a hunk of chocolate that had accumulated on the side of the vat. Um-Good!

In 1935, Sheridan hosted the County Basketball Tourney. It was bitterly cold weather. A few days later, the Sectionals were also played here. This time the weather was ideal. This helped the sale of the "Eskimo Pies." In all, there were 219 dozen sold.

During the holidays, the ice cream was molded to fit the occasion. At Christmas they made ice cream Santas, angels, and bells. For Easter they made lambs and angels. Hearts were made for Valentine's Day and green and white was used for St. Patrick's Day.

Christmas was special. In addition to the ice cream, there was hot salted peanuts, taffy, peanut brittle, hard peppermint candies, and cinnamon balls. The caramels were plain vanilla, chocolate, or walnut. There may have been other kinds. It was cooked, and then poured onto a marble slab which had heavy iron rods on all four sides. This formed a large square about an inch deep. The caramels were scored; and then, when they had cooled, cut into inch squares. Each piece was picked up and placed onto a square of waxed paper which was then folded so it wouldn't come unwrapped easily.

The cinnamon balls started as a fondant which had been cooked and then wrapped in a cold, wet cloth to "ripen" (as they called it.) Then small pieces were pinched off and rolled in the palms of the hands until it formed a small ball. These were then rolled in cinnamon.

During harvest, farmers got together to do their thrashing, as not many could afford the expensive thrashing machines. The women got together and cooked the meals. At the end of the season they all got together and had a pitch in. It was usually hot, so they ordered gallons of ice cream to serve for dessert.

If any of us children got sick, we had the usual chicken soup, but we also got ice cream. (No, I didn't get sick in order to get some!) It is, to this day, a "warm fuzzy" for me.

One April Fools Day, Dad brought home two paper bags from the factory and set them on the table. Being very curious, I opened up the first one and found it full of corks. I wouldn't touch the other one -- once stung...! Mom came into the kitchen, saw the sacks and promptly picked them up. As she turned them upside down, out fell "Eskimo Pies." They were hidden under the corks (Dad's idea of a joke.) My dad was full of life and people enjoyed being around him. I think he really enjoyed making ice cream for people's pleasure. I've never forgotten the generous portions he used in the cones people bought. There is more than one way to make a profit. Money doesn't have to be the only objective. A profit can also be the amount of enjoyment you get when you give someone else pleasure, (something my dad must have learned that at an early age.)

The passage of time has forever changed what was known as "Little Italy." While the building that housed the Corner Grocery still remains, many other businesses, including the Ice Cream Factory are gone. As for me, I will always have fond memories of the Ice Cream Factory.